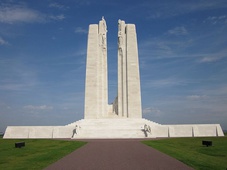 This collection houses films and resources that centre upon various wars in Canadian History.  Our educational playlists are selections of films on themes that tie in with Canadian curricula and address the important issues of the day. Many of the playlists are also linked to our study guides.

The seminal Canada at War documentary film series was first broadcast on ...

The seminal Canada at War documentary film series was first broadcast on the CBC on April 3, 1962. Its 13 half-hour episodes were culled from more than 14,000,000 feet of film, mostly shot by Canadian Army cameramen during the Second World War but also including footage shot by German and British film crews. It took a team of editors three years to put the series together under the supervision of documentary filmmaker extraordinaire Donald Britain (who also wrote the commentary). It remains, to this day, one of the most important works on the Second World War.

National Film Board of Canada
Rating

The National Film Board of Canada's award-winning online Screening Room has over ...

The National Film Board of Canada's award-winning online Screening Room has over 3,000 productions.

Films on this site can be streamed free of charge, or downloaded for your personal use for a small fee. We also offer educational works on a subscription basis to schools and institutions.

Our Collection includes documentaries, animations, experimental films, fiction and interactive works. We showcase films that take a stand on issues of global importance that matter to Canadians—stories about the environment, human rights, international conflict, the arts and more.

National Film Board of Canada
Rating

NFB's collection of educational films and resources. Remember, as a SK teacher, ...

NFB's collection of educational films and resources.
Remember, as a SK teacher, you have access to materials here.

NFB films encompass a wide variety of war topics studied in both ...

NFB films encompass a wide variety of war topics studied in both elementary and high schools. War is an important theme in Canadian and World Studies, Science, English Language Arts, History, Geography, Citizenship and the Arts. The films on this playlist make up only a fragment of the NFB’s remarkable collection of films on war and history. Educators are also encouraged to view other NFB titles apart from the films seen here should they wish to pursue a specialist path.